Bulgarian traffic police launches today (07th March 2011) a seat-belts-campaign. There will be regular police-checks for the seat belt being put by all passangers in a vehicle. The emphasis will be on the belts on the back-seats as it turns out that only 3 - 5 % of the passengers in Bulgaria use seat belts when travelling on the back seat.

DriveBulgaria reminds: It is the law to put on your seat belt in Bulgaria on every seat (including the backs seats) and it does save life!

The current penalty fee for not putting a your belt on the back seat  is 25 EURO per passenger (payable by the passanger himself and not by the driver).

Recent surveys show that about 300 people die every year in Bulgaria because of not wearing a seat-belt on the back-seat.

Have you ever been involved in an accident and have you experienced the effect of the car seat belts yourself? Please share and comment. 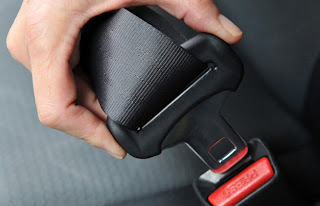 Your seat-belt could be very often the difference between life and dead...
Публикувано от DriveBulgaria.com в 5:48 PM